I’m back on the random movie grind folks. It’s real. The – putting something on the TV while doing basketball game notes – mentality has officially begun. (Insert week long […]

I’m back on the random movie grind folks. It’s real. The – putting something on the TV while doing basketball game notes – mentality has officially begun.

This past weekend I dove into the deep annals of the HBO catalog and came up with Bad Company (2002). I saw Anthony Hopkins and Chris Rock; a tandem both enticing and ripe for disaster. I am here to report that it is actually how you would this combination would be; a truly beautiful calamity. 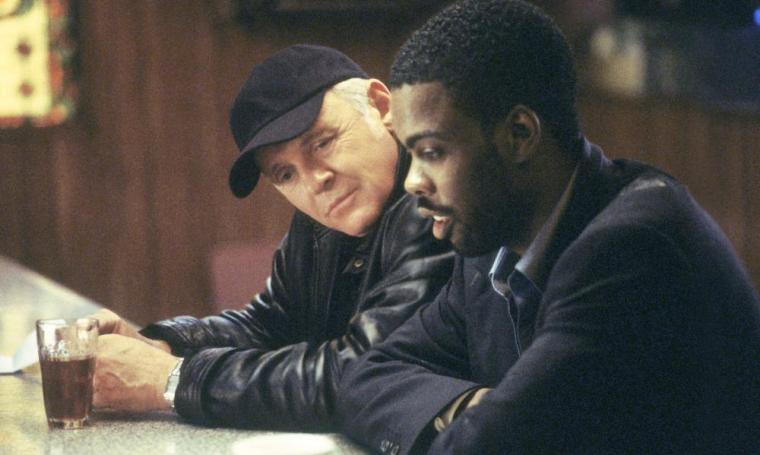 Bad Company is unintentionally comical at numerous moments. The most notable instants are whenever then 64-year old Hopkins is running over short straight distances. Don’t get me wrong. I love Hopkins as an actor, and he has moments in this film that bring you some joy…but the scenes of him wailing his arms as he tucks and runs are just really hard to ignore.

Another shout out goes to John Slattery. The Boston, MA born native, who is most known for his role in AMC’s Mad Men and HBO’s Veep, took some serious acting lessons and delivered a fantastic over-the-top performance of the character Roland Yates. Yates is the boss to Hopkins’ Officer Oaks and his main mission is to deliver hurtful lines towards the elderly field officer. The fierceness to which he delivers the lines are comical, and it just makes Hopkins’ sarcastic retorts even more giggly-sly smile inducing.

Rock plays a set of identical twins separated at birth; one who serves in the CIA, and the other who scalps tickets for a living. When the government operative is killed, it’s up to the sassy, untrained, 180-degree opposite persona to save the day.

Yes, this premise sounds absolutely ridiculous. This is a movie where the studio heard the idea and went “Great! Let’s make it!” but didn’t fully think about how to make it as well as it could be. But, give director Joel Schumacher credit, because he made Bad Company a seriously passable piece of popcorn entertainment.

Bad Company has just enough zany and redeemable traits to make it worth a “I’m not fully gonna pay attention but throw it on while doing some work” watch.