With the recent release of Toy Story 4, the debate out Pixar movies and which one ranks up top ensued within my family. I was asked to lay out my top […]

With the recent release of Toy Story 4, the debate out Pixar movies and which one ranks up top ensued within my family. I was asked to lay out my top five, and here they there!

What are your top five Pixar movies? Comment and let me know!

The first of two Brad Bird movies on my list, The Incredibles ranks among my top five Pixar films because it come around at a very perfect time. It was the first animated super hero movie I ever saw and it could engrain itself in my brain on just that fact. Add in a heartfelt family story, dazzling visuals that both scared and intrigued me, and two of my all-time favorite side characters; yea The Incredibles made an impact on me.

The most memorable part in the movie for me was when Violet and Dash where running away from the evil henchmen in their flying vehicles on Syndrome’s island. I had no idea that animated action could be that exhilarating and funny. It really did put a new found, more mature respect for animation into my 12-year old noggin.

A special shout out to Edna and Jack-Jack. The costume superhero fashion designer and adorable little baby are two of my favorite secondary characters. I cannot fathom the amount of times I have yelled randomly “NO CAPES!” to my sisters. Also the post-credit scene with Jack-Jack and the babysitter was pure comedy gold. And the little one only got betters in The Incredibles 2! The sequel is not as charismatic as its predecessor, but there is not denying that Jack-Jack vs. the raccoon is the best part of part two. I was crying. Literally crying on an airplane at a baby shooting lasers out of his eyes.

The Incredibles is Brad Bird project through-and-through. His project was nominated for four Academy Awards, winning the Oscar for Best Sound Editing and Best Animated Feature. Also the most underrated part of this movie might be the musical score. God it’s just good. 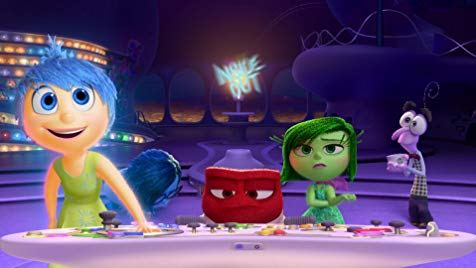 Inside Out is probably the one movie on my list where most people will be like “Huh?”. But oh the tears. Oh the humanity.

This 2015 release marks the first time an animated movie tug at my more adult heartstrings. Inside Out took my emotions and strummed them like an acoustic guitar solo, drawing out the sniffling and one-swipes under the eye ducts to an eventual heaving sob. The ending to Inside Out had me grabbing my knees and trying not to look so absurd in front of a bunch of 10-year olds and their parents. I saw this movie at 10:30 am at a Somerville movie theater during the summer and let me tell you that I was the only person seeing it alone and without any kids. It was remarkable to look at all the parents with heavy, dark eyes while the kids were just laughing at Angry going full rage.

The voice casting in Inside Out was picture perfect with Amy Poehler voicing Joy, Phyllis Smith lameting in Sadness, and most flawlessly, Lewis Black being Anger. Just awesome.

Also, the Husband’s emotions not paying attention during the puberty probe…ahh that is way to true for the male species.

Inside Out won the Academy Award for best animated feature in 2016 over four other films that I have still yet to see.

This movie could not have come at a more vulnerable time for me; the summer of 2010, just after I graduated high school and am getting set to go college. A group of seven of us, my three sisters and three cousins with me, went to go see Toy Story 3 in Seymour, CT. The seven of us walked in…and six of us walked out leaking all the tears possible (Martha you have no soul J).

Toy Story 3 is Pixar’s most emotional movie. If Inside Out is cutting one onion, Toy Story 3 is being inserted into a whirlwind of onions all being chopped by Emeril Lagasse with him softly whispering “Bam”. It tornadoed my emotions.

The moment of Andy giving away his toys to Bonnie…I had that exact moment giving my toys away. I remember packing up some of my oldest Lord of the Rings action figures and telling my mom that I was too old to play with them. I still remember playing pretend with my younger cousins and realizing the innocence I had lost in just a few year span. The ending to Toy Story 3 made me revert back to an eight-year old state of wanting to line up my Star Wars figures and recreate some of my favorite fantastical tales.

It was nominated for five Academy Awards at the 2011 Oscars, including Best Picture. It is one of only three movies to ever be nominated for Best Picture along with 1991’s Beauty And The Beast and 2009’s Up. It below away the competition in the Best Animated Feature and FINALLY Randy Newman won an Oscar for best Original Song. He was nominated for the category for his efforts in all Toy Story’s first three movies but didn’t collect for “You’ve Got A Friend In Me” or “When She Loved Me.” Instead it was Toy Story 3’s “We Belong Together.”

I think Finding Nemo is the movie that put Pixar on the map as a blockbuster movie maker. It is the seventh-high grossing animated movie ever, coming away with over $380 million dollars domestically and over $70 in the opening weekend.

It is a perfect blend of comedy, family, emotions and fulfillment. It blends addressing the child and adult audiences more so than others; for example, Cars is for the kids and Toy Story 3 hit the adults hard. Finding Nemo broke through the mold and crossed into audiences that would not have thought to see it at first glance.

I remember seeing it in theaters as a family, but it is years later in a random hotel room on the west coast that I remember this movie so fondly. Our family is together, trying to find something to watch on the TV. Constant bickering ensuing because myself as a stubborn teen who is too cool to be compromising won’t concede to anything. But we scroll across Finding Nemo and the awkward manufactured family tension dissipates. I start rolling on the bed laughing at the silliest of jokes and the mood of the entire evening changed.

The fish tank community’s chants surrounding Mount Wannahockaloogie are still in my sound effect library. Whenever someone surprisingly cleans a room in my house, I’ll think to myself: “Ahhh, the tank is clean.” And Dory’s “Just keep swimming” is literally a life motto of mine and a constant reminder to float on the uneven waves of life.

Finding Nemo doesn’t punch you over the head with any aspect of it, but it’s many small branches of excellence touch the audience just the right way to tune in everything oh-so-effortlessly. At the 2004 Academy Awards, it swam home with the Best Animated Feature Oscar.

The original. The inaugural venture. The GOAT.

Toy Story came out on Nov. 22, 1995 and immediately laid new groundwork for what animated movies could be. It showed that there was a new benchmark for what these types of movies could be. It goes without saying that the visual aspect of animation was growing and evolving, but that wasn’t all. The writing for Toy Story is crisp, and only improved as the years go on within the franchise, not the mention the voice actors bringing the words to live was on another level for its time.

At the 1996 Academy Awards, Toy Story was nominated for three Oscars; Best Original Screenplay, Best Original Song and Best Music for a Musical or Comedy Score. Remarkably, Toy Story didn’t take home away awards, but director John Lasseter was given a special achievement award “For the development and inspired application of techniques that have made possible the first feature-length computer-animated film.”

Toy Story holds up remarkably well and remains one of the greatest pure cinematic adventures that Pixar has put out. At its brisk 80 minute run time, the audience is introduced to characters, motifs and moments that are timeless. This is the movie that started it all. It literally opened the door for an entire new generation of animated films. Toy Story is a bright sheriff star on the cinematic historical timeline.