The summer’s cash cow has hit theaters and its Fast & Furious Presents: Hobbs & Shaw. The two unlikely partners, Luke Hobbs and Deckard Shaw, played by Dwayne ‘The Rock’ Johnson and Jason Statham, must join forces to save the world from an evolution-obsessed technology based terrorist group called Eteon. Hobbs & Shaw have their mission complicated with Hattie Shaw, played by Vanessa Kirby, joining the equation. That trio must deal with countless goons and a self-proclaimed black Superman, Brixton, who’s played by Idris Elba in an action-comedy adventure connected to the larger Fast & Furious cinematic universe.

Talking in broad generalities, Fast & Furious Presents: Hobbs & Shaw fits seamlessly into the Fast & Furious universe. The tone of the movie in terms of the comedy and charisma is the game. The cars, violence, brashness and stakes are all in the same ether. This movie does not suffer from the lack of the other Fast & Furious characters.

Luke Hobbs is introduced into the movie as a family man looking out for his daughter, but is soon thrusted into the international fray. At the same time, Deckard Shaw is brought forward talking with his mother who’s in prison before being roped in by a CIA agent using his family as the magnet. Once these two hit the screen together at the same time, that’s when the best of Johnson and Statham are shown off.

WWE promos. The World Wrestling Entertainment promotional material. That is what it felt like when Hobbs and Deckard were trading jabs with one another. Taking shots at the other’s machismo, height, muscles (or lack thereof); that is when the dialogue in Fast & Furious Presents: Hobbs & Shaw is at its best. Also, the exact same can be said for Brixton. I mean his heel wrestling persona can be the black Superman! It fits. 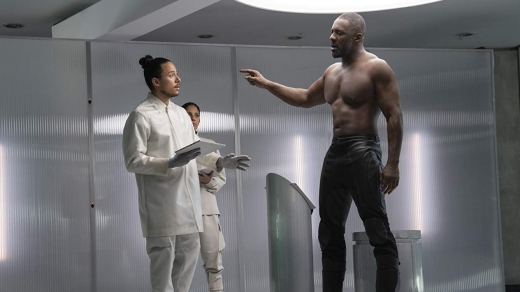 Sticking with the wrestling theme, is there anyone with a louder action movie pop right now than Vanessa Kirby? She was in last year’s Mission: Impossible – Fallout which was one of 2018’s top-10 movies and the best action-movie of the year. Now she only continues to be scorching by injecting herself into one of the most profitable movie franchises of all time as its most prolific female killer? What a leap from The Crown!

All of the actors do a good job in their roles. None are terrible and none will blow your socks off. They all play to their strengths very well and Fast & Furious Presents: Hobbs & Shaw uses these tropes to appease the masses.

Director David Leitch is no stranger to high-octane action films. He is an uncredited co-director of John Wick and then went on to make Atomic Blonde and Deadpool 2. Leitch has the artistic stroke when it comes to action and in terms of over-the-top madness, Fast & Furious Presents: Hobbs & Shaw is a masterpiece of chaos.

There is no denying the pure adrenaline portions throughout Fast & Furious Presents: Hobbs & Shaw are remarkably well done. The chase sequence in London, the simply ridiculous power plant break-in and escape, and to a lesser-effect the final act; all three are worthy additions to the absurdity that has become the Fast & Furious franchise. In particular, the sequence in London when Hobbs, Shaw and Hattie all join forces for the first time was the main highlight of the film in all aspects.

The reason the finale of the movie doesn’t work is not because the action is sub-standard, but because it was rushed to. The pure acceleration put on the story and character development, for Hobbes in particular, acts as an oil spill on the otherwise fairly consistent pace of the movie. I know that Fast & Furious revolves around the idea of family, but it is shoehorned into Fast & Furious Presents: Hobbs & Shaw like a late wedding invite being added to a crowded table. That component of the story isn’t of particular interest and isn’t necessarily welcomed by all, but it’s added to make a certain audience content.

Also, was there a contractual amount of times that the film had to show Roman Reigns of the WWE? I mean honestly, he is forced into the background of every scene. There is one scene where he is in the foreground and literally picks up a piece of metal and looks at it. I mean come one.

Other nit-picks to prod are some continuity errors with costumes or positions in cars during action sequences. The magical changing of day to night to day during the final action scene; it’s amazing how fast the sun rises from the pitch darkness.

As the classic unveiling of the evil organization Eteon’s plan and motives begin to unfold throughout the adventure, it’s difficult to not be reminded of Spectre from the James Bond franchise. An overwhelming powerful group of evil individuals being led by a mysterious individual who starts as only a voice but will be eventually unveiled at a later time and date. It’s an action-franchise movie cliché, but it is for a reason. Fast & Furious Presents: Hobbs & Shaw is going to get a sequel.

Fast & Furious Presents: Hobbs & Shaw is going to please audiences across the globe and it is going to make a bajillion dollar. It is a very entertaining movie and has moments that’ll grab your attention, but the necessary stagnant moments of exposition are enough of a downer to bring it down as a whole. Also, while cameos are great, there is one that goes on egregiously too long and takes directly away from Hobbs and Deckard.

The last act at Samoa has too much packed into it and the rushing of character moments makes it seem like the Hallmark channel was rushed in. Also, was there a contractual amount of times that the film had to show Roman Reigns of the WWE? I mean honestly, he is forced into the background of every scene. There is one scene where he is in the foreground and literally picks up a piece of metal and looks at it. I mean come one.