Mike and I’s Kenney Stanko Studios is in its infancy, but anyone who has taken the time to read a supply feedback, I sincerely thank you for your valuable time. […]

Mike and I’s Kenney Stanko Studios is in its infancy, but anyone who has taken the time to read a supply feedback, I sincerely thank you for your valuable time. We look to carry this in 2018 with more momentum and more contributors.

With the 2017 calendar year winding down, it’s a time for reflection. As part of a mini end-of-year series, here are my top five movies released over the last 12 months.

Before you all RAVAGE my selections, I readily admit that I have not seen every movie that has come out this year. I will be producing a post in the upcoming weeks which will include the five movies from 2017 that I am looking to watch ASAP. It’s a process. I’ll find the time to make it all happen.

These five films are not in any particular order. Each has remarkable merits that make them all outstanding in their own right. 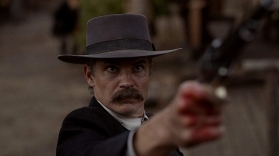 God this movie was incredible. Simple as that. The acting performances by Saoirse Ronan and Laurie Metcalf places them immediately in the driver’s seat come award season. Metcalf as Christine “Lady Bird” McPherson’s mother is without question the best supporting role performance by an actress in a long, long, time.

I wrote my full reaction to Lady Bird (2017) which you can peruse through if your heart desires (CLICK HERE). I’ll just add that listening to Metcalf talk about first-time director Greta Gerwig’s script and adherence to the written word made my admiration for the original screenplay grow even more.

The Ringer’s Chris Ryan alongside Andy Greenwald, who many know from the sure to be multiple Emmy-winning After The Thrones (2016) reaction show to Game Of Thrones (2011-Present) (humanoids will understand), brought in Metcalf for a short interview on their “The Watch” podcast. I strongly recommend everyone take a listen if you can. The last 20 minutes brings new appreciation to Metcalf as an actor that is very fun to listen to.

This is the best acted movie of the year in my mind. There are many others that I bet will in contention like Call Me By Your Name (2017), Darkest Hour (2017), and The Post (2017). But of those I’ve seen, Lady Bird stands atop performance-based pedestal.

If there was a movie that shook the American culture to its core, it is Jordan Peele’s genre-mashing masterpiece, Get Out (2017). This horror, mystery, thriller, comedic and haunting tale portrays a seemingly endless number of political and social issues in a masterful way. It isn’t preachy, it isn’t begging for attention, Get Out just draws you and handcuffs you to your seat.

If you haven’t seen Get Out, see it, then go back to the menu, and press play again. Peele sneaks so many subtle little notes that made me want to look up the classic “Buzzfeed: See What You Missed” lists.

I credit Peele for creating my most mind-bending viewing experience of 2017.

As a fan of the X-Men, I was disheartened when X-Men: Days Of Future Past (2014) and X-Men: Apocalypse (2016) were released. They fell below my expectations.

Insert Logan (2017), the movie that made most met, and exceeded my antsy anticipation. Director James Mangold and Hugh Jackman combine to give the most visceral, and human superhero movie I have ever seen. It is no easy task to make an invincible man like Wolverine relatable, but Logan immediately throws you into the vulnerability of X-Men’s most recognizable force.

It also can’t be said how important this movie being rated R is. Thanks to Deadpool (2016) leading the way in showing a raunchy hero can draw the box office, Mangold got to give what Logan fans dreamed off. Combing the traits of the comic Old Man Logan and classic cowboy western flicks, Logan stands out as one of a very few comic-book movies that I love to re-watch.

And the poster with three claws of Wolverine all bloody is my most memorable in a long time.

Let it be known, I scare very easy. Let it be known, It(2017) is one of the best horror movies I have ever seen. Both Michael and I made our more in-depth thoughts known in our two posts back in September, but just to rehash: It was INCREDIBLE for using suspense, setting and tone for scares rather than gore, and cheap jump moments.

Still one of the most haunting aspects of It was how it isolated the kids in the most horrifying fashion. The parents were monsters of their own, and with the group of losers being painted into a corner of loneliness, Pennywise makes his horrific presence known.

To quote the closing marks of my initial review: It is the scariest movie I have seen since The Conjuring since 2013. It’s one the same level of the terror I had when I first saw The Descent (2005). It is not just a must see…it’s a must experience. Do not miss out on It.

Christopher Nolan is a genius. Pure and simple. Dunkirk (2017) is a masterpiece of storytelling. It is the best directed and most cinematically appealing movie I have seen in 2017. Seeing it in IMAX was the most immersive in-theater experience since Avatar (2009).

I still don’t know how Nolan was able to blend three different timelines so smoothly. Each tale, those centering around a desperate shoulder, a dutiful civilian, and a heroic pilot, all accentuate each other perfectly.

The entire sound department, which includes over forty (40!) people according to IMDB, deserves immense credit. My ears were ringing with the sounds of bullets and bombs dropping. I really brought me back to the first time I saw Star Wars: A New Hope (1977) when my innocent ears first heard the ringing of laser blasters firing and lightsabers clashing.

Another aspect of Dunkirk I have come to appreciate more and more is how it manages to be excellent without a true singular “villain.” Sure there is the German army who have surrounded the isolated allied soldiers, but the true antagonist is so much more complex. The enemy is an amoeba of things like fear, despair, loneliness, skepticism and cynicism. Humans are their own worst enemies.

I seriously cannot praise what an accomplishment Dunkirk is as a film. Nolan, I love you. You are great. Don’t ever stop being you.

As I mentioned in the opening, I will be producing posts in the upcoming weeks that will include the five movies from 2017 I have missed that that I am looking to watch ASAP. There are many I need to make time for.

What about you? What are your top five movies from 2017? Do you agree or disagree with me? Comment below or find me on Twitter at @Jstanko99.