Silence. No sound. That was the movie theater as The Lodge credits rolled. It’s as if the entire audience had their mouths duct taped.

The Lodge is a slow burn horror drama that highlights how one’s past can never be fully buried. As the story progresses, the characters involved get stretched out like a wrought rubber band. The strands of elastic are breaking, just like the spirits of the characters, until finally there is no other option but to painfully snap.

Directors Severin Fiala and Veronika Franza take the original screenplay of Sergio Casci from Hammer Film and certainly put their own stamp on it. In a Q&A session with The Alamo Drafthouse, the tandem note how the original script was a lot more playful and dialogue-filled. The final product of The Lodge is anything but playful; instead of the crisp conversations, Fiala and Franza emphasize atmosphere and dread. The entire movie was filmed in sequence and on site, which undoubtedly helped the actors and filmmakers build up the never-ending nervousness.

Among the small cast, the undeniable standout star of the The Lodge is Riley Keough. She plays Grace, a young woman with a devilish past, though not of her own volition. She is an interesting case study of how the nurturing one has when younger has a lasting effect, and in this case it’s in a traumatizing way. The mental gymnastics Keough acts out are haunting, and the sereneness in her final form is a major part of the chilling tone the movie ends on. 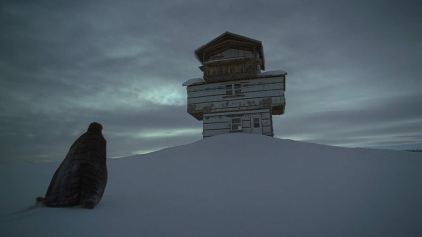 The true horror at the conclusion of the The Lodge is how it forces the audience to envision what’s going to happen after the film concludes. It’s not a cliff hanger per say because it’s obvious what’s going to happen next, but by choosing to show it not on screen, Fiala and Franz force the viewer come to the horrid realization. It’s a major reason why audience across the country will be stunned into silence as the credits start rolling.

Personally, it was hard to look at The Lodge and not think of Hereditary (2018). On a tangible level, the opening moments of the movie has an all-to real doll house used for scene setting and transitional effects. Then just minutes later there’s a shot of doll hanging out a window aimlessly…which now will always remind me of Bridget’s beheading. On a more metaphorical level, both The Lodge and Hereditary deal with broken families dealing with a sudden death. Both have cults and religious undertones intertwined and a female lead who is becoming more-and-more unhinged.

The similarities are not bad by any means. Hereditary is one of my favorite horror movies of all time, and The Lodge is still different enough to stand on its own merits.

The Lodge is hard to talk about without spoiling. As Fiala and Franza said at the start of their Alamo Draft House streaming prior to the Q&A; the best thing to do is not know anything about The Lodge before watching. That testament really does stand true. The Lodge is a gut punch, and probably not a movie anyone is going to voluntarily watch more than once. But gather the courage to watch it once. It’ll be worth it even if you’ll be mute for hours following.