Skip to content
“Bumblebee” | A Transformers Based Movie Is Good??
Movies

“Bumblebee” | A Transformers Based Movie Is Good??

A reboot of the four-part Michael Bay Transformers universe wasn’t something the world was necessarily asking for, but Bumblebee flew into theaters in December of 2018 and surprised critics and […]

A reboot of the four-part Michael Bay Transformers universe wasn’t something the world was necessarily asking for, but Bumblebee flew into theaters in December of 2018 and surprised critics and audiences alike. First time live-action director Travis Knight helmed a rag-tag cast and a tired idea into an exciting and ideally simplified story that hits many cords.

The first take away from Bumblebee is the sincerely excellent acting performance by Hailee Steinfeld as Charlie. Seriously, she is the most consistent part of this Transformers reboot. Steinfeld brings phenomenal charm and human levity to a movie centered around a robot who can’t speak. That’s a very heavy burden to carry but Steinfeld handles it with grace.

A second area that Bumblebee exceeds expectations in is the amount of genuine comedy throughout the movie. Some of it is very heavy handed *cough John Cena’s character cough*, but there are subtle moments and nods that are filled with chuckles. The scene that stands out is when Bumblebee is exploring Charlie’s abandoned house. He is sniffing around and making a mess like a new puppy let outside the cage, so seeing the Cyberton warrior literally be paired with a pup in the scene is a clever diametric addition.

In terms of the simplification I mentioned, it’s most noticed in the action. Unlike Michael Bay, who likes to throwing all his ideas into a metal blender and then blast the viewers with his unholy concoction, the violence in Bumblebee is east to follow. You know which robots are good and which robots are bad. It’s a novel idea, right?

Bumblebee isn’t a perfect movie by any means. In terms of the narrative, the conclusion drags out a bit too long in the end and is personally, the least rewarding part of the movie for me. Charlie’s romantic interest Memo, played by Jorge Lendeborg Jr., really does nothing of substance except making one phone call. There was also a major rush and “sure, why not” attitude with the government and its relationship with the Decepticons.

But let’s get to the major crux here. John Cena. Poor John Cena. He is trying so hard. 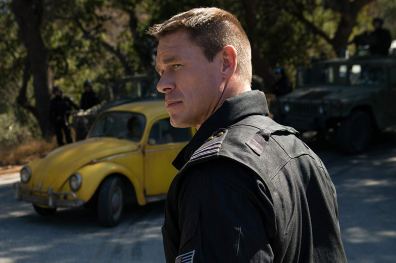 The wrestling superstar plays Agent Burns, a disgruntled military man who wants to secure Bumblebee and all Cyberton invaders. He is literally the first character we meet and he is just ridiculing a fellow solider with a paintball gun and very cheesy comedy. Then he becomes hardened by a traumatic experience, and then he learns understanding and amends for his mistakes. Does this story arc sound familiar to anyone? (For the record everyone should be raising their hand).

The character himself is not Cena’s fault. He is not given great writing or dialogue to work with. Cena is just not enough to carry a role that’s note fleshed out and given max attention. He goes full wrestler mic skills multiple times, but we don’t even get a chance for him to really kick ass like WWE fans want.

Bumblebee rises from no expectation but has managed to get audiences excited for a possible sequel. This movie is self-contained in its 1987 California setting and allows time for things to flesh out. We aren’t overdosed by Optimus Prime or other secondary Autobots. There isn’t any sign of Megatron’s evil heavy hand. The final three minutes of the movie is bait to Paramount Pictures to green light a successor, and I’ll say that I am interested to see what it will be.