I know I am late to the party, but Spider-Man: Homecoming (2017) was DOPEEEEEE! Seriously did not anticipate enjoying the movie as much as I did. Seriously. I was on […]

Tom Holland is superb as Peter Parker. We got the glimpse of his charisma in Captain America: Civil War (2016), and man-oh-man did it translate into its own full fledge story. The tale of your Parker and Spider-Man flows seamlessly, with few to little filler scenes. There is just enough large-scale Avengers intervention, but credit to the multitude of writers and director Jon Watts for giving Spider-Man: Homecoming a self-contained story that delivers.

This movie doesn’t get caught in the exposition of how its protagonist came to be. Instead, it’s explained with a simple conversation in a high school hallway. I love it. I have seen it enough. Spider-Man: Homecoming focuses on the man not wearing the mask. It focuses on Parker, the high school kid who is a loveable loser. GOD IT’S SO REFRESHING. It’s not about Spider-Man deciding to be a high school kid, it’s about Peter Parker deciding to be Spider-Man. All the character defining decisions of this-or-that are made without any mask on.

Spider-Man: Homecoming also has one thing MANY, MANY comic-book movies fail to achieve. The movie has a relatable, grounded, some-what sympathetic villain. Michael Keaton as Adrian Toomes / Vulture is the best Marvel villain besides Tom Hiddelston’s Loki. It is not even close. Both are dynamic in their own right.

Toomes has reasons for action, and his motivation is critically unassuming. Family. Anything for family. You see the darkness he is willing to go to keep his life objective on track in many moments, but the BEST scene in the flick is the conversation between Toomes and Parker in the car just prior to a homecoming dance.

Minutes prior the audience is thrown a curve that Spider-Man’s main baddie is the father of Peter Parker’s big crush. Now cue in the hilariously awkward car-ride to the dance by the father, but add in the alien-hybrid weapon building evilness aspect. The simple cuts between Parker and Toomes, which escalate from medium-cuts to close-ups to build up the tension, are timed impeccably.

Seriously, Spider-Man: Homecoming being so self-contained is amazing. It reminded me of what made Rogue One: A Star Wars Story (2016) so enjoyable; the audience knows where the characters are in the grand scheme of things, but the story itself is micro in its execution with just enough macro-level involvement. I was worried that Spider-Man: Homecoming would fall prey to greater world building, but NOPE! 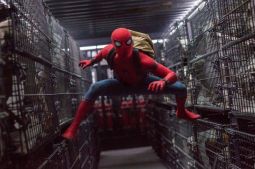 Quick shout outs to Jacob Batalon and his portrayal of Ned, and especially Zendaya as Michelle. She killed it; all scenes with her were comedic gold, and finding out she is in The Greatest Showman (2017) gives me more intrigue for the musical.

Spider-Man: Homecoming is my favorite Avengers based Marvel movie. Most fun I’ve had watching a colorful comic-book based movie (therefore excluding Logan (2017)) since The Avengers (2012).