All hail Sam Mendes and Roger Deakins. That’s the first thing everyone who be saying and thinking after seeing 1917. Mendes put a lot of emotional and personal energy into […]

All hail Sam Mendes and Roger Deakins. That’s the first thing everyone who be saying and thinking after seeing 1917. Mendes put a lot of emotional and personal energy into this war drama, and it results in a technical achievement that’s also a stunningly beautiful movie. 1917 is simple in its story, but grand it its execution. The production design and filming format elevate a simple race-against-time concept to a most memorable military epic.

There are no unnecessary moments in 1917. From the onset we are introduced to Lance Corporals Blake (Dean-Charles Chapman) and Schofield (George McKay). The tandem is sent on a mission to deliver an urgent message to a regiment that’s hours away from marching into a trap. An added emphasis is put on Blake, who is told that his brother is a commanding officer with the soon-to-be attacking forces. Together Blake and Schofield must traverse enemy territory to try and deliver the message before it’s too late.

The landscapes Blake and Schofield traverse unfurl like an ancient tapestry painting. The camera movements let the details of the setting jump out. A quick example is when the two are traversing through No Man’s Land and in the trenches are caked in dead bodies. There are skeletons everywhere and the duo are so oblivious to the horror that they just topple them.

The magnificent art that Deakins and Mendes put on the screen reminded me of different seasons. Each of the different environment had a different color hue. They all evoke different tones and signify a different benchmark in the story’s timeline. The most stunning setting is a panning-up scene-setting shot following the sightline of Schofield as he realizes the abandoned, German infested town in front of him. The orange flames flickering on the shadows of Écoust-Saint-Mein in the glow of the moonlight made me literally my dropped jaw off the floor.

Additionally, that nighttime scene in the abandoned city sticks out because it seems straight out of a nightmare. In the context of the movie, the vision of the no-faced individual chasing out hero after a near death experience in a place that can only be described as hell is wonderfully artistic.

Seriously all hail Roger Deakins and Sam Mendes the visual brilliance of 1917. You have to see it in a movie theater. Can’t recommend it enough.

It’s not all visual splendor in 1917. There are some exceptionally well written aspects of the screenplay that deserve some recognition. How about the fact that this is a war movie but it has minimal gunfights? It’s a story that doesn’t use violence as its catalyst. Instead it uses characters and war’s different environments to propel the story.

Among the characters are the main players, Blake and Schofield, but there are other big-name actors that hop up for just small-time roles with wide ripple effects. Colin Firth, Andrew Scott, Benedict Cumberbatch, Richard Madden and Mark Strong all appear. Strong plays Captain Smith, a leader who delivers a shady foreshadowing warning to Schofield that plants a seed of doubt which only blooms at the 1917’s final act. Just a tease of uncertainty lends a ton of emotional weight.

There have been many comparisons between 1917’s Blake and Schofield and Lord Of The Rings‘ Frodo and Sam. It makes sense; two souls on a journey of utmost importance with a limited chance for survival. The tandems travel through different environments and interact with characters of different cultures along the way.

Also throw in line “some men just want the fight” and that can fit perfectly into Gondor’s ruler Denethor. In Lord Of The Rings: Return Of The King, he makes Pippin sing a sad song on the bring of darkness and violence…much like certain scene in 1917.

The most dynamic similarity between Lord Of The Rings and 1917 involves a trounced and abandoned city. Écoust and Osgiliath are A LOT a like. A series of crumbling bricks over the swampy footing being swarmed by bad guys. They are one in the same in my eyes. 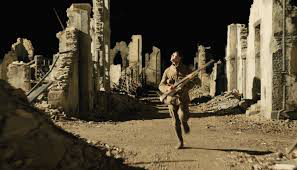 A friend of mine interoperated a piece of symbolism in 1917 that is too good not to include in my review. Shout out to you Steven, because this is smart to notice.

There is slow-moving intimate scene early in the movie when Blake is explaining to Schofield how there are multiple different types of cherry trees. The conversation comes up as the two are walking through an orchard that’d been chopped down by German occupied forces. When the sequence first unfolds, it appears like a classic bonding dialogue interaction. Cut to later in the movie at a when Schofield is getting baptized by an unruly river, there are cherry tree leaves falling like snowflakes.

The cherry tree motif runs through till the very end of 1917. There are numerous different countries and nationalities in World War One. It was the war to end all wars, and everyone was included. At the end of the movie, the audience is treated to a medical tent where soldiers from across the world are either dead or dying. They have been chopped down, just like how the cherry trees were. Wonderful storytelling from the writers, Mendes and Krysty Wilson-Cairns.

1917 is nominated for 10 Academy Awards after winning Best Director and Best Drama at the Golden Globes. It will surely clean up certain categories. For myself, of the movies I have seen, 1917 would be nominated for Music (Original Score), Production Design, Film Editing, Cinematography, Directing, and Picture. I give 1917 the awards of Production Design and Cinematography.